SafetyChain’s monthly FSMA Friday’s April session focused on the Sanitary Transportation Rule. Both Dr. David Acheson and Rolando Gonzalez with The Acheson Group dedicated as always to the FSMA Fridays crowd, called in from Shanghai (!) to share insights about this rule. And of course the latest FSMA updates.

Prior to starting the session, the TAG team and SafetyChain team were chatting about the rule, and interestingly enough Dr. Acheson had commented this was probably one of the more straightforward rules. But as the session unfolded, as with all these FSMA rules – the devil is in the details, and understanding how they may apply to your company, and what you need to do to be compliant!

While this informative recording is now available – some key highlights from the session transcript to share:

Provisions in that statute was whistleblower protection – that regulation is final. No great surprises in the final rule. It tracks and it does indeed do what we thought it would, which is to protect whistleblowers in food companies … squarely protecting whistleblowers, but under OSHA, not FDA.

PCQI training is well under way and the FDA announcement training on the animal rule is coming up very soon. And we’re still waiting for guidance for preventive controls.

General purpose of the Sanitary Transportation Rule of Human and Animal Food:

The purpose in a nutshell, is to codify industry best practices for transported food. The FDA in their comments make it pretty clear that they’re not trying to reinvent the wheel here with this rule. They’re basically trying to make it a regulatory requirement that the industry best practices are followed with regard to the transportation of food. It’s really about making sure that when food is in commerce, when it’s moving around by road or by rail within the United States or heading for the United States, it is safe. It is safe from a time temperature perspective. It’s safe from a cross-contamination perspective.

.. I think it really boils down to ensuring time temperature controls and paying attention to agents that could cause public health risk moving between food items or between items in transport vehicle and from ill-cleaned vehicles. 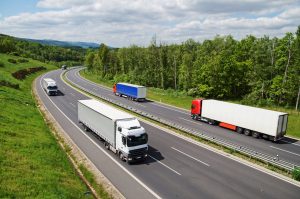 It’s pretty much to cover multiple parties that are involved in transporting human and animal food unless they are exempted. These are for in particular the shippers, the loaders, the carriers and the receivers of that food.

These different parties may be representing multiple capacities. Let’s say a shipper may also be a loader and a carrier. Or the loader may also be the carrier etc. In fact they can reassign responsibilities, some of the responsibilities that we will be talking in more detail in a few minutes here to another party so they can transfer those responsibilities as long as there is a written agreement between them. That’s going to be part of the documentation requirements as well that are contained in this rule.

The rule also applies to other countries or persons within other countries that ship food to the US, and arrange for the transfer that any intact container with that food to be transported within the US if that food is going to be consumed or distributed in the US. Companies that are transporting food just transporting it within the US but with the intent to export so it’s not going to be consumed in the US, those are going to be covered by the rule until that shipment reaches a port or a US border. Up to that point they will be covered by the rule as well.

Who Is Excluded/Exempt from this Sanitary Transportation Rule of Human and Animal Food:

Rules specifically exempt groups and this applies to all the categories (shipper, loaders, carriers, receivers). If they have less than half a million dollars in average annual revenues from transport operations over a 3-year period. It’s as always there’s a lower limit and if it’s less than $500,000 then you’re exempt.

If you are moving food that is trans-shipped to the United States (so in other words it’s arriving in the US and it’s on its way to somewhere else by road or by rail which be definition would be Canada or Mexico) then that is exempt. If food is coming into the United States for future export and it is not going to be consumed or it’s not going to be distributed in the US, then that lets you off the hook as well.

An interesting change in the final rule and put this in the context of the proposed rule was starting to include USDA regulated products but the final rule has essentially exempted those.

The exemption on that one is if you are a loader, shipper, carrier or receiver and you’re engaged in the transportation from food facilities that are regulated exclusively by the USDA under the Federal Meat Inspection Act, the Poultry Products Act, or the Egg Products Act, then you are exempt. That’s changed. The proposed rule included those things but it does say regulate exclusively which interpreting as if you are a duel-regulated facility and you are producing meat or egg products, poultry products, then you are not exempt. That’s just an important little nuance to me. It does use the exclusively word in there.

Reading some of the preamble language it’s like, “well in fact you’re exempt from this rule but the movement of food by farms is in fact covered under the produce rule because we’re starting to get into the cleaning, sanitation, and the safety of food in relation to equipment that is farm-based.”

It’s like letting us off the Sanitary Transport Rule but you’re not exempt from maintaining the safety of food if you’re shifting it around in a farm-based vehicle because you’re covered under the Produce Rule.

Exemption food that’s completely enclosed by a container so if it’s entirely enclosed by a container then it’s exempt. Unless, always there’s an unless it requires temperature control for safety. Some of the examples that the agency gives in the regulation about what’s considered not completely enclosed most of it’s obvious. If it’s an open basket of food or an open box, ventilated plastic bags often it’s a question are they considered to be exposed and the answer is yes. If you’ve got fresh produce and there’s little holes in the bags for venting it, that’s considered exposed.

Finally, live animals are excluded with one of course key exemption mullet and shellfish. They are not excluded, but live food animals are.

And yes there was a lot more shared on this FSMA Fridays session – including:

If you haven’t signed-up or joined us for these informative monthly FSMA Friday sessions? What are you waiting for? Join the FSMA Fridays club – https://safetychain.com/resources/fsma-fridays/